Urban Shantyboats and a Flying Towboat: The Beginnings of Harris Boatworks 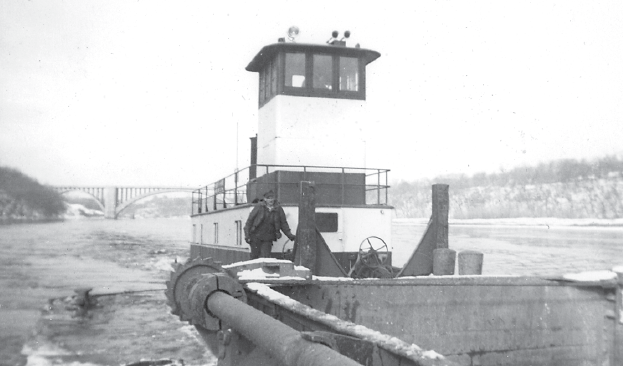 An old river man by the name of Bob Harris has been teaching me some history lately. As we talked I learned that he and I had worked on a couple of the same towboats — in different decades. He and his father built these boats, the Harry R. Harris and the Mike Harris, in Minneapolis.

During the Great Depression a shantyboat community lined the bank along the Upper Mississippi River Flats, below the bluff where the University of Minnesota perched on the East Bank about a quarter mile below the Washington Avenue Bridge. During the 1960s and 70s the U of M Centennial
Showboat was moored there, and these days this little stretch is home to the U of M’s rowing club.

In the 1930s and 40s A.B. “Harry” Harris, his wife and son, Bob, lived aboard one of the shantyboats. A.B. did a variety of things to make ends meet, from repairing cars to rebuilding air compressors. He even helped a young writer named Clarence Jonk launch his houseboat Betsy-Nell in 1933. He built a speedboat in hopes of making money giving tours of the river between the Ford Dam and St. Anthony Falls. That dream ended when some kids threw a whiskey bottle off one of the bridges and beaned his first paying customer.

Then on May 9, 1938, his luck changed. The sternwheel towboat S.S. Thorpe lost control of its tow as it flanked away from the Minneapolis municipal dock in heavy current, on the west bank, and slammed into the Washington Avenue Bridge.

Cutting the paddlewheel loose appeared to be the only way to free the hull from the bridge pier it was pinned against. This was unfortunate for Federal Barge Line, the boat’s owner, as the sternwheel was new and had made only one trip from St. Louis to Minneapolis. The sturdy
wheel was built of two-inch white oak. As the wheel floated around University Point old man Harris spied it from the river bank, where he was working on a car. He dropped his tools, ran to the shantyboat and rousted young Bob. They rowed out in a skiff and towed the wheel to shore. Eventually he found a lumberyard willing to re-saw the planks, and construction began on the first Harry R. Harris towboat. The hull was built from those white oak planks — now an inch thick. Then the hull was sheathed with thin steel sheets. Finding materials during the Depression usually called for some creativity. The steel sheets were recycled Standard Oil signs. 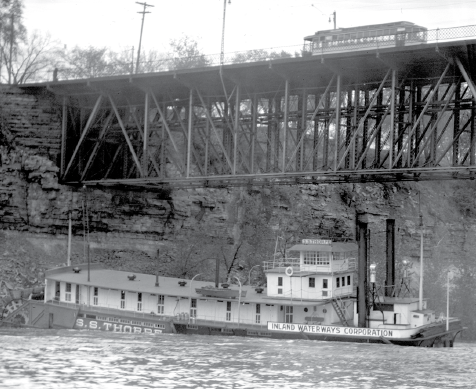 In 1938, the S.S. Thorpe towboat was swept away in heavy current and crashed into the Washington Ave.
bridge in Minneapolis. To free it the Federal Barge Line cut the paddlewheel away. Quick thinking by A.B.
Harris gave the Harris Boatworks its first boat and a start in business.
The S.S. Thorpe returned to the river and worked for many years before being renamed the George M.
Verity. It now sits on the riverfront at Keokuk, Iowa, where it is a National Historic Landmark and museum.
(Photo courtesy of the Minnesota Historical Society)

Young Bob Harris was six years old when he got his first real job, sitting under the overturned hull and placing washers and nuts on the bolt ends for the bottom planking, as another boy drove them through. The other boy had to hit the bolt head twice with a sledgehammer to drive it completely through the plank. Bob recalls that his hands took a beating in this work. At day’s end he walked a few feet to the ramp that served as the front porch of his family’s boathouse. 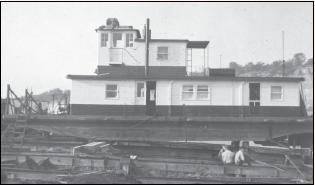 The first Harry R. Harris, a wooden towboat, was constructed at Dingle Boat Works on St. Paul’s west side, near the present site of the St. Paul Airport.

It took several years to build the hull and superstructure. By the time the boat was ready for propulsion World War II was underway, making it hard to get the engines needed to drive the propellers. Bob remembers his dad bought the engines that had been in broadcasting mogul Stan Hubbard’s first big yacht. When they were installed, Harris Boatworks was born. 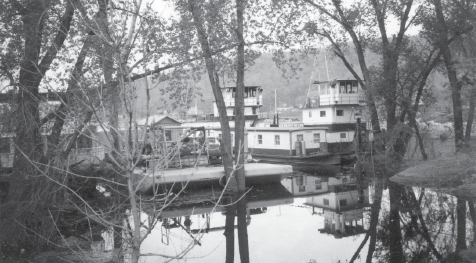 The Minneapolis Park Board saw this part of the river as prime real estate and began to pressure residents of the ramshackle marina to clear out. A.B. and his neighbors refused, and for years they lived with one eye on the river and one on the hill where the powers that be eyed them jealously.

A.B. struggled to find contracts for pushing barges around the Twin Cities harbors. They were a small outfit with only one boat. How could they guarantee delivery of barges if the boat had mechanical problems? One of their first contracts was to haul away tons of shale rock being dug from the river bed to prepare for construction of the Lower St. Anthony Falls Lock.

One day while hauling shale near Lake Street, Bob was decking for his dad, who was piloting, when something went wrong. The Harry R. Harris caught fire and burned to the hull. They watched helplessly as the boat they had built with their own hands turned to ash. It was not only their livelihood, but had served as an extension of their shantyboat home. Personal possessions went up in smoke.

Bob climbed the bluff into south Minneapolis to borrow fuel so the family could head back upriver in the gas-powered skiff they had saved. Later, Bob bought the oak hull back from the insurance company and built his first house on it. He and his new bride spent their first years of marriage moored on the bank of University Point next to his parent’s boathouse.

To continue work on the contract, the Army Corp of Engineers put one of its small workboats on the job. A.B. piloted the boat, hauling barges full of rock away from the falls. In his off hours, he and Bob began building a new, steel-hulled Harry R. Harris. It was smaller than he would have liked, but he designed it so that it could be easily enlarged once his contract with the Corps was completed.

In 1950, after the work was done, old man Harris pulled Harry out of the river and cut the boat in half, straight down the middle. The hull was widened from 12 feet to 18 feet, to accommodate a center engine and make the Harry a triple-screw boat. A.B. also added six feet to the stern, so flanking (backing) rudders could be installed in front of the propellers, increasing power for backing into the strong Mississippi currents when stopping downstream tows.

The second Harry R. Harris had a successful first season, towing coal to the Black Dog plant on the Minnesota River, but at the end of the 1951 season it was nearly lost in a rare November ice jam on the Mississippi. As the temperature dropped to minus 10 degrees Fahrenheit, ice packed the river from Lake Street to Bohemia Flats in Minneapolis. It built up under the boat and the eight coal barges moored along the cement wall beneath the Washington Avenue Bridge. Harry was being tilted higher on one side and was in danger of being turned over completely. 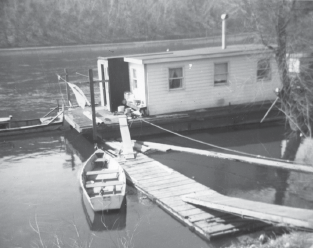 The Harris family’s home was a shantyboat near the University of Minnesota.

In an effort to save the boat and barges, the city of Minneapolis opened the sewers along the sea wall and flushed them with warm water, hoping to melt the ice enough to set it free. This plan succeeded only in allowing the barges to sink on the side closest to the wall. Huge timbers had been wedged next to the barges to prevent this, but the weight of the coal cracked the hull at key stress points.

A.B. enlisted a crew to melt the ice under the Harry with torches, leaving two pillars of ice in place to prevent the boat from falling on the workers. Then the crew pushed through the ice to create holes for dynamite. Four sticks of dynamite were detonated to clear the ice from under the boat. Nothing happened. The crew attempted five more blasts, but the Harry remained in place. In frustration, the crew detonated the remaining case of dynamite at once. Fifteen sticks were carefully placed into the holes in the ice under the boat. Bob remembers, “Old Harry went ‘BOOM’ up into the air about five feet and ‘BAM’ landed back on the ice nice and level. When the ice moved out at last Harry was in the water and doing fine.”

The Minneapolis Park Board kept trying to get Harris Boatworks and the other shantyboat residents to vacate this prime real estate.

“They had a hard-on for us. They didn’t want us down there. They even built the storm drains, and instead of running the big pipes into the river they ended right in our yard. A heavy rain would just wash some of our stuff away. So we got some 12-by-12s and made some big corks, and they had to cut them out. We started to organize, and became the Minneapolis Boat Club. There were 14 of us against the park department.

“But that old ice jam straightened it all out for them … did what the park board couldn’t do. We had big cables tied to big cottonwoods, and as the ice jam formed, the river rose fast, and those cables got tighter and tighter. Then they just popped or pulled the fittings out or even uprooted some of the trees. It was that ice jam in 1951 that accomplished what the political forces of Minneapolis couldn’t do.”

Bob has since told me many stories about towboating in the 1950s and 60s. Around 1970, a few years before I began working on the river, he sold his boats to another local operator. It is amazing to hear about how different this little stretch of river was from what I came to know it — and how some things never change.