By about the third or fourth deep, wet snowstorm in late February and early March, St. Paul river rats began to speak in hushed tones about high water in spring. Even before the ice was off the river here in St. Paul, local river folk were witnessing the terrible flooding on the Lower Mississippi via social media, and the television news was showing aerial shots of flooded towns and breached levees down south.

Lower Miss tow boaters have been Facebooking videos of harbor towboats capsizing in the strong currents. In Baton Rouge last week one of the boats was crossing the river between ships at anchor and was tipped over on the anchor chains of one anchored ship. Of the videos posted of the incident, one showed the tug on its side with the starboard propellor still spinning. The post also mentioned that the crew was safely rescued. There have been other capsizes where crewmen are still missing.

Up here in St. Paul, the hazards are not so hair-raising. We live on the bluffs high above the Mighty Miss. Flooding here is usually just a pain in the posterior.

The water has jumped six feet in a week, to over 10 feet, and is predicted to reach 18 feet or more. A major flood is 17 feet and usually closes Lilydale Road, which winds through a floodplain park under Mendota Heights. Major flooding also closes some of the parks across the river, including Crosby Farm Park and Hidden Falls Park. Flooding is also life-altering for communities along the Minnesota River and other tributaries where the farms and towns are on the flood plain. Expect to hear more about farmers losing livestock, water treatment plants shutting down, and roads washing out.

This is also going to delay the barge towing season here.

There are some other small businesses along the river in St. Paul that are seriously challenged by the fast-rising water.

Watergate Marina is flooding while there is still ice in the slips, which blocks the marina from putting the bigger boats in the water and getting them off the land. Smaller boats can be trailed to higher ground, but many vessels are too big to move up the hill.

Itasca to the Rescue

The commodore of Watergate Marina, at mile 845, Virgil Amsden, told me that Upper River Services sent the harbor towboat Itasca to break ice out of the slips. They were able to break it up enough for the marina staff and volunteers to move the smaller pieces out into the channel. Once they had some of the docks clear they could launch enough boats to prevent them from being flooded while in their cradles on land.

Liz Miller and Bill Peterson had to vacate their Covington Inn so that the Itasca could push the floating B&B to shelter in Pigs Eye Slip down around Newport, Minn.

“I tried to fight moving the Covington Inn, thinking that all the talk about a historic flood coming from a bunch of Chicken Littles. Then, after seeing the predictions for the coming week, I relented and we moved the boat with one-day notice. We packed our bags, defrosted the freezer, brought all our perishable food to my aunt’s house, packed up the dogs, pulled fragile stuff off shelves and onto the floor, and we were ready to leave. I have lived on the Covington Inn for 17 years in August, and it’s bizarre to watch her getting pulled out into the river, away from me.” 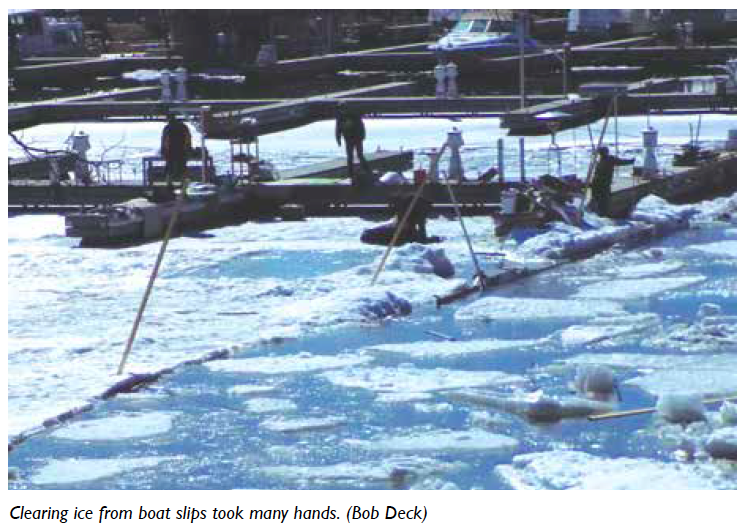 The Covington has been moored at the St. Paul Yacht Club for over 17 years, and Liz has only been forced by the city to move two other times, in 2011 and 2014. It seems that these “100-year” floods are happening every few years now. Getting evicted like this turns their lives upside down for at least a couple of weeks.

“It’s been only four days, but we checked on her yesterday and she’s just fine! So, the flooding is crazy and I’m losing business for awhile, but it’s ok because my boat inn is just fine, not like people who lose everything in a natural disaster. That is a real tragedy! Me, I go with the flow! However, I hope it will be another, at least, eight years until all this happens again!”

At the Padelford excursion boats’ docks, as the river was poised to flood Harriet Island, the city of St. Paul cut the power and water to Gus Gaspardo’s establishment. By then the boats were getting close to the tops of the mooring pilings. Without electricity, he had to run the generator of Ugh the Tug to keep the office open and the refrigerators running. Capt. Gaspardo has had to ferry his crews to and from Harriet Island in a pontoon boat. 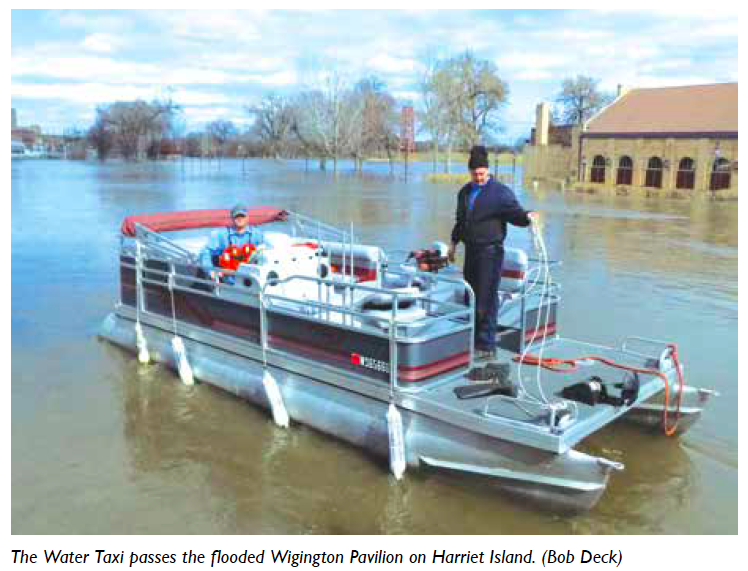 On Monday the 25th, he picked me up at the Showboat for the half-mile ride up to the docks. I knew to expect ice chunks, because when I stopped at the overlook across the river from Lock and Dam 1, the river was filled bank to bank with large pieces of ice moving downriver over the dam — moving fast, too.

The last time the water got this high around St. Paul was 2014. That crest was in late June, however. This spring flood is early enough that Gus had to dodge ice chunks on the way to and from the Showboat and the dock. He turned the pontoon around just above the empty pilings where the Covington was normally moored. When crewmen Paul Mooney and Matt Spence stood up to prepare to fend off those pilings I had a bad feeling. Just then a large piece of ice popped up behind the outboard, and Gus managed to drive up and away from a near capsize.

“Damn ice just gets shunted down between the pontoons to the prop! Had to float for a little longer than I wanted to.” He grinned when I was at last close enough to jump aboard from the last bit of dry steps along the bank.

Out on the dock, we stood around watching ice chunks grind under the fleet of tour boats and trees float by in some very fast current. Tammy Gaspardo wore a worried look as we surveyed the scene and watched the large gathering of ice and trees on the upstream end of the Padelford wharf barge.

“At least we don’t have to cancel any June weddings this time.”

A lot of people are just hoping that the river is back to “normal” by June.