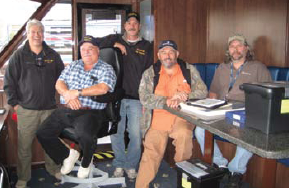 Many people dream of traveling the length of the Mississippi. When I’m driving the Padelford tour boats around St. Paul, nearly every passenger who pokes his or her head into the pilothouse asks me the same question: “How long does it take to get to New Orleans from here?”

Most of my 35 years working on the river has been spent in the St. Paul stretch. I have little practical knowledge of the rest of the river, so last fall when I got a chance to help deliver a new SkipperLiner cruiser, the 105- foot Lady of the Lake, from the shipyard near La Crosse, Wis., to Lake Charles, La., I jumped at the opportunity. The trip turned out to be a real adventure, and now I can answer a question or two.

On Halloween night Capt. Gus Gaspardo, co-owner of the Padelford Packet Boat Co., and I drove to the shipyard. The Lady was ready to go. The interior was finished off, but there wasn’t a stick of furniture, because the owner planned to complete the décor later. So this was to be a camping trip with Cajun cuisine provided by the new owner’s friends, who’d brought several coolers of seafood.

Tip 1: Plan a trip itinerary carefully
Calculating how much fuel the Lady might burn was crucial, as there are only a few places to fuel a private vessel below St. Louis. It was November, so many of the marinas on the Upper Miss were done for the season.

The last pleasure-boat-friendly marina, called Hoppies, is below St. Louis at river mile 158. Hoppies is an interesting little flotilla of old flatdeck barges strung out with “yachts” showing varying degrees of hard use. Hoppie and his family have run it for a long time, and when his wife told me the whole thing was anchored to a sunken Civil War craft, the Windsor, I figured that made sense, because most of the stuff topside looked over 100 years old. These fine river people did so much more than just fuel us up — they helped with transportation and maintenance chores while we were there.

We needed to refuel the Lady about every 400 miles, so our next planned stop was Vicksburg, Miss., which was not as hospitable as Hoppies. None of the harbor services would even talk about selling us fuel. Towboats are the only customers with fat enough wallets and large enough tanks to drag the hose out for. We passed Vicksburg and found fuel at Memphis.

Tip 2: Make sure your navigation gear is adequate and you know how to use it.
We had a set of river charts for both the upper and lower rivers, and echarts for the Atchafalaya and the Gulf Intracoastal Waterway on a laptop. The radar was state-of-the-art Garmin e-chart lay-over stuff. When the radar was on, the electronic chart was superimposed on the screen, which to my mind was an amazing feat of technology. In all the years I ran towboats in St. Paul, we never had radar, and when I steered the North Star on the Tennessee River, we used a World War II-era unit that was as big as a refrigerator and hardly ever worked.

So I was pretty excited to play with this new unit. That is, until one night when the fog started rolling in. I was about to take over before we entered a thick bank below the Cora Dock Lights at mile 98, when a deer swam out from under the bow, headed over to the Missouri side of the river.

“Well, if it’s too foggy for him, we’d better think about tying up somewhere,” I said, and turned the boat around to head for the last light, just barely visible at the dock. We needed something safe and solid to tie to. 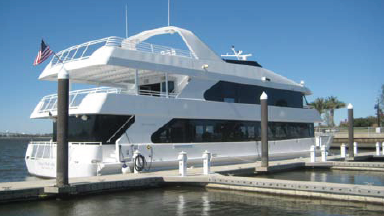 Lady of the Lake rests at her new home in Lake Charles, La., after her 1,655-mile trip from La Crosse, Wis.
(Bob Deck)

Tip 3: Have a usable anchor
Anchoring was not an option for us, because at the boatyard on French Island I had watched as three strapping men used a small winch to ship the 200-plus-pound plow anchor into its snug little bracket in the pulpit. Without a winch, which the new owner was sure we’d never need, we didn’t have a prayer of retrieving the anchor.

I hailed the towboat sitting alongside some coal barges.

“Hey, Skipper, would we be able to lay alongside your barges there before this fog gets any thicker?”

“Sorry, Cap, but ya’ll cain’t tie off here. I’m gonna be moving these barges around in a bit,” he said.

I glanced down at the radar as the fog obscured everything and saw that the screen had changed from a well ordered picture with names of lights and landings into an abstract painting. It took several panicked minutes and Gus’s help to figure out that the radar and the chart only coincided if the boat was heading along the sailing line of the chart. If the boat turned crossways, the radar heading would show that orientation while the chart remained up and downstream.

To a recovering towboater the most impressive part of the trip was all the different tows and towboats we met and passed along the way. Each stretch of the river seemed to have different customs of meeting and passing. I could not understand the lack of radio chatter. In years past, channel 13 was busy with boats identifying themselves and their location, but the pilots we met seemed irritated that we were calling for traffic. We were also a little frustrated until we figured out that they were using a new thing, AIS, an Automatic Identification System. Once your vessel is plugged in, every boat in the area gets a read-out on its radar screen identifying your location, boat name and where your paths might cross.

“You all need to get AIS for that boat!” we were told from St. Louis to Lake Charles.

The last leg of the trip was westbound on the Gulf Intracoastal Water Way (GIWW). After eight and a half exciting but intense days of round-the clock piloting, I was ready for the end. The GIWW, or “ditch,” as pilots call it, was straight out of “Creature from the Black Lagoon” — critters everywhere. I was dancing around in the pilothouse after a decent four-hour sleep. Gus was eating breakfast, getting ready for his turn out.

“Those are brown pelicans,” he informed me.

“What a great morning!” I gushed.

Gus groused, “Damn, I hate someone who is so chipper in the morning.”

“Well, I can smell the finish line,” I defended myself.

“Well, if I see a snake in that river I’m going to grab a pike pole and fling it up here on you and your chipper attitude.” He slunk out the door but flashed a tired smile before he closed it.

Kirk, a deck worker from Mississippi, elbowed me, grinned and pointed to a venomous snake swimming just off the starboard bow. I put my finger to my lips.

Later, shortly before midnight, we transited the Calcasieu Lock approaching Lake Charles. The new boat’s owner and his new pilot came aboard to ride the last leg. They were telling stories and whooping it up a bit as I was trying to discern the crossing we had to make into a busy oil-tanker channel. Suddenly a row of yellow lights shone along a great black wall that seemed as big as the Great Wall of China.

“Yeah, that’s an inbound ship,” the young pilot said to me. “I could do this with my eyes closed.”

I checked the ship’s clock and saw that it was midnight. “Here you go, Cap. Show me the way,” I said.

I stepped aside, found a cold beer in the bar behind the pilothouse and sat and listened to the owner tell a tale of sinking a houseboat in the Gulf. We’d made 1,655 miles in about nine days.