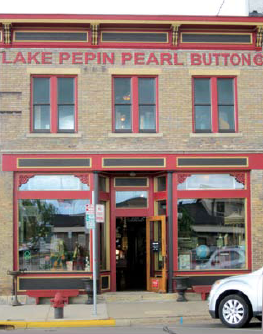 Dave Close stood before the vacant and ramshackle Lake Pepin Pearl Button Company building and gazed out at Lake Pepin. The pale brick building had stood empty for 85 years in downtown Lake City, Minn. Nobody was entirely sure what shape it was in, but Dave needed to know. He and his wife, Juleen, were considering buying the building to grow their antique business. Several contractors had been inside to look at the floors, ceilings and whatever else could be studied.

“One guy I really respect told me he wasn’t brave enough to even think about buying it. Said it wasn’t what he could see that scared him but what he couldn’t see. They could not tell me if the brick walls would hold up or not. All of the windows were boarded shut, but when I stood outside on the corner looking over the marina and the river, I knew that was a view I wanted to see every day.”

They bought the building in July 2010 and opened for business in November.

The Lake Pepin Pearl Button Company building was built in 1866 of Chaska, Minn., cream bricks that were shipped by steamboat from the brick works at Chaska, on the Minnesota River west of the Twin Cities. Chaska was settled at a site rich in high-quality clay. The bricks fired to a cream color with a sort of glazed crust that was aesthetically pleasing. Years later when major fires devastated the young town of Lake City, they left its only brick building only mildly scorched.

At first the building was a dry goods store. It only became the famous Lake Pepin Pearl Button Company in 1907. The pearl button industry rose and fell in a short time, and by 1914 the building was a warehouse. It is known even today as the “pearl button building” because during the 80-plus years it was boarded up and abandoned the painted letters on the front stubbornly proclaimed it “Lake Pepin Pearl Button Co.” even as the wood framing rotted and the ceiling slowly caved in.

Despite the projected cost of buying and rehabbing the old place, Dave went at it full steam ahead. “I took one more look from the front door at the river and said ‘this is it’. So we signed on the dotted line, and we’ve been here for two and a half years, and I haven’t regretted a minute of it.” 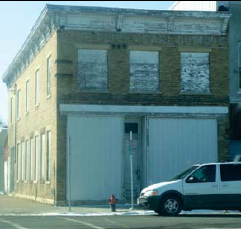 and I haven’t regretted a minute of it.” Dave was bitten early on by the antiquing bug. At 17 he inherited his grandparent’s stuff, but he was forbidden to sell anything. He has treasured his grandfather’s rifle collection for over 40 years. He fed his habit at flea markets, hunting for Victrolas and other old record players. Then he expanded his interests to ice-boxes and commodes.

He worked 33 years at the Post Office in Eagan, Minn., after which he retired to pursue his passion full time. He and Juleen built a house on the bluffs overlooking Lake City and rented space in another antique dealer’s store. It wasn’t long before he wanted his own store, so they began looking in earnest. And it was the earnest money he finally convinced the Pearl Button owner to accept that really made him sweat 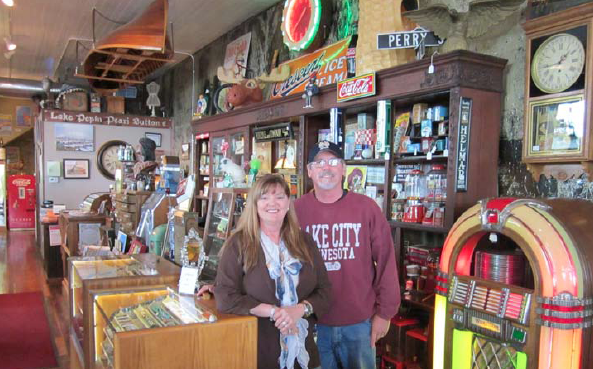 Once inside obvious problems presented themselves. The ceiling on the top floor was falling apart. The tin covered walls were flaking lead paint. The brickwork needed extensive tuck pointing, and some bricks needed to be replaced. It is hard to get cream colored bricks of the old Chaska quality anymore, and when he finally found some they were the wrong size. That problem was solved by another problem. The main header over the front of the first story was a sixteen-by-sixteen- inch timber with some rot. Workers removed much of the brick here and managed to scrape away the rot and save the timber. This gave them the idea to scavenge brick from hidden spots and use it to restore the building’s façade.

Dave led me into the basement to show me the old mussel pool — a small stone enclosure the size of a hot tub in one corner where shells were soaked in solution until soft enough to cut button blanks from.

“They didn’t make the buttons here. They just cleaned the shells and cut out the blanks to be sent to a button factory,” Dave explained.

These days Dave, Juleen and partners Rene Lawson and Laura Schwartz run the store together and rent space to a few other dealers. Space is allocated to give every seller a window view of Lake Pepin. In the back of the store the partners have set aside a small space to honor the history of the building. There are photos of clammers harvesting mussels and the front of the building as it served different purposes over the years. A basket for harvesting mussels and a tow-bar with treble hooks that mussels would clamp down on when disturbed is displayed along with examples of the button blanks and shells of various mussel species.

Today the front of the building looks better than it ever has, thanks entirely to the love and care that Dave and his partners lavished on the old and dear treasure. And every day Dave gets to enjoy the view of the Mississippi that he loves so much.