A Tale of Two Showboats

Two iterations of the University of Minnesota Centennial Showboat served as icons on the Twin Cities riverfront. The first was moored in Minneapolis along the river flats below the main campus of the University of Minnesota. Years later, the second was docked directly across the Mississippi River from downtown St. Paul. Then on September 16, 2019, it disappeared downriver, bound for a new life.

The first incarnation of the showboat began in 1957 when the U. of M. bought The General John Newton from the Army Corps of Engineers. The 175-foot-long sternwheeler had been built in 1899. In those early years, this showboat toured up and down the Mississippi, delivering performances in other Minnesota ports, including St. Paul, Stillwater, Hastings, Red Wing, Wabasha, and Winona. The first play was “Under the Gaslight,” by Augustin Daly.

My first memory of that showboat was buying tickets to see “The Importance of Being Earnest” in the summer of 1974, just before my senior year of high school. I missed the show, but a classmate, my future wife Jean, did attend. Later as a U. of M. student, she attended a summer class in costume design on the showboat. She remembers the large organ, which played for the stage shows.

Years later, after becoming a local harbor pilot, I was sent to the riverfront below the campus to pick up the old showboat and haul it down to South St. Paul for dry-dock work. While I never did see a play aboard the old boat, I did get a chance to play around on it that day in 1990. After Brian Brezinka had faced the Lois E up to the stern for the trip, I hopped aboard to do a little exploring. I entered through the stage door on the starboard side and almost immediately fell through the floor walking up the aisle on the main floor. I curtailed my exploration of the old boat at that point, and we pushed it down to the marine ways in Pigs Eye Lake.

Ten years later it was again drydocked in Pigs Eye Lake for work when a hot welding rod was inadvertently knocked onto the wood deck at quitting time. The wooden hull caught fire, and it burned up — a total loss.

The second showboat was built in Greenville, Miss., for Capt. Bill Bowell partnering with the U. of M. Having been christened the Frank M. Whiting, the new Minnesota Centennial Showboat was delivered to Harriet Island in 2002. That July, it hosted a melodrama based on Dr. Jekyll and Mr. Hyde. Audience members were encouraged to cheer the good guys, and boo and hiss the villains.

Capt. Bowell’s Padelford Riverboat Company crewed and maintained the second showboat for summer and winter U. of M. student productions. We also used it in between seasons for weddings and private parties. The yearly dinner gathering of U. of M. physicists was always odd and interesting. 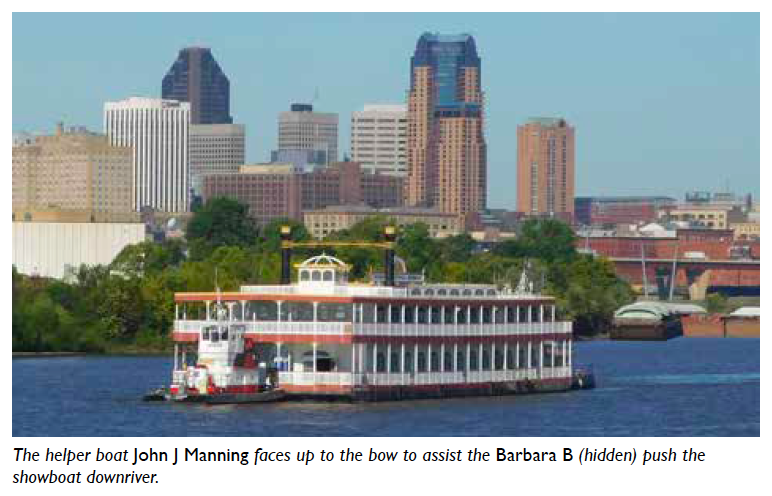 There were some memorable New Years’ Eve soirees, too. A party for the Portable Barge Construction Company turned into a local river rat memorial after Pat “Tip-Over” Tuttle passed away. Those kinds of gatherings always morphed into early morning drinking and storytelling sessions, as we remembered fallen comrades.

Another run of “Under the Gaslight” in the summer of 2016 was the last performance by the U. of M. theater department on the showboat. After a couple of seasons with no plays, the city found the university in abeyance of its agreement, so the university surrendered the boat to St. Paul for a dollar.

We watched for three summers as the old boat sat waiting for someone to come up with a business plan to reopen it. My boss, Gus Gaspardo, fielded dozens of calls from St. Paulites who were disheartened to see the showboat sitting idle and slowly falling into disrepair. He always advised them to lobby the city.

On Monday morning, September 16, 2019, the showboat ended its residency in St. Paul, when two towboats, the Barbara B pushing and the John J Manning faced up to the bow for visibility and maneuverability, departed for its new home near Winona, Minn. I followed downriver from Harriet Island to Dayton’s Bluff taking photos and saying goodbye as they cleared the bridges of St. Paul and headed out of sight.