A riverboat pilot learns that art is hard work. 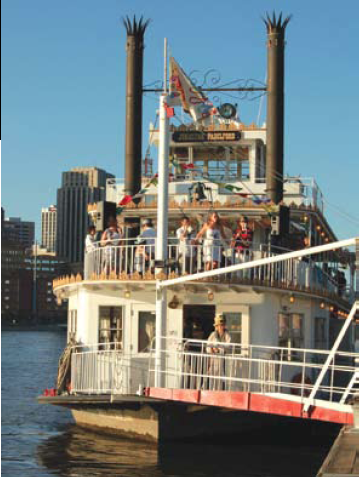 St. Paul — The wharf barge was a flurry of activity the afternoon of June 4 when I stepped onto the Jonathan Padelford. Most the fuss centered on the kickoff for the first Northern Sparks Art Festival. Throughout the night, from the Stone Arch Bridge, in Minneapolis, to the St. Paul riverfront artists of all kinds would be displaying and performing for the multitudes. The Padelford would be the traveling link “Megalops” between many venues, making four round trips between Harriet Island and Pike Island

The Minnesota flag on our foremast was replaced with a work by Katie Hargrave showing the old river channels that ran through here since the days of the glaciers. Each channel was a different color and superimposed one over the next, for a psychedelic affect. A handful of people were stringing up handkerchief-sized prayer flags, a piece titled “The Kinship of Rivers” created by Wang Ping, depicting a lot of stuff, but the common theme seemed to be rivers from around the world merging with our Mississippi.

Our dock boy at the gangway was Pete Dreiessen, dressed convincingly as Gilligan, who draped a plastic lei on everyone who boarded. Artist Andy Sturdevant, playing Titanic Captain Edward Smith complete with coat and cap, took over my pretrip announcements, turning it into a performance.

The first load of artists and guests were greeted by the Como Avenue Jug Band playing spirited renditions of what must have been traditional bluegrass tunes. I thought I recognized some Grateful Dead tunes, like “Brown-eyed Women.” I had a good seat, standing by the gangway and later in the pilothouse right over the speakers. The only band member I could see while piloting was the pretty girl clog dancing on a raised board while singing with the musicians.

Players in period dress included John Driscoll as “Jacques the Voyager” with a bag of trade goods slung over his shoulder. Never saw him actually trade anything, but his beer tankard was always full.

On the other side of the dock, coworkers Gus, Gary and Matt worked feverishly with artist Andrea Stanislav to get her “Nightmare” running. A technician from Buffalo, N.Y., had driven all night to assemble a sport arena type digital display where her creation, a video loop of a white horse running, could travel the river from St. Paul to Minneapolis. The trial run showed great promise. We hoped to pass the horse going upriver after our first trip.

That first trip went smoothly, despite strong currents that kept us from reaching the Minnesota River. So the prayer flags of hope for a spiritual link between the various rivers of the world went unrealized.

By the time we secured the boat to unload and reload for the second trip, a pall had fallen over the dock. A technical glitch would prevent “Nightmare” from making her run that night.

Paul swung the gangway around and hoisted it up promptly at 2 a.m. While he was untying the stern lines three boys on bikes skidded to a stop at the top of the ramp. They locked the bikes to a bench and sprinted down the dock towards the passengers crowded along the rails. I yelled “Stop!” Paul yelled “Wait!” They didn’t even slow down, but jumped onto the outside of the boat and were swiftly sucked through the windows by helping hands.

Sunrise on the river was a glorious sight.

Meanwhile, Brad Zellar performed a one-man story about a rat infestation in St. Paul, in a voice that was part Cajun and part Mark Twain. It was as if he were telling a shaggy dog story from 1800s newspaper clippings.

Wearily we docked at 6:45 Sunday morning. I had learned one lesson: art is tiring. Once the dock lines were secure I went below and onto the dock to assist Paul with the gangway. The band on the Texas deck was beginning a version of “Proud Mary.” It was the third or fourth time they’d performed the classic, and it was fresh each time. The main deck was full of people queued up to leave. Several artists were slumped across the tables snoozing.

When it was over, I spied Andrea coming down the dock to say good morning, and I asked how she was. Expecting sadness I was surprised to hear her express a desire to continue the effort and fulfill her dream of a “Nightmare” on the river later in the season. She wanted to try it again. So I learned that one quality of a true artist is an unwillingness to give up.