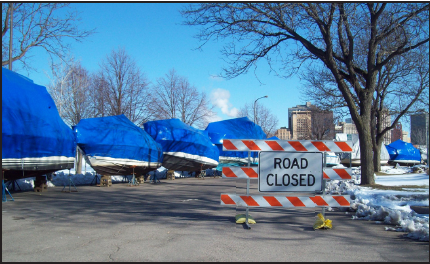 Predicting the height and impact of a flood requires a mind-boggling calculus. It must take into account known variables, like snow pack and soil saturation. It also includes unpredictables, like future rainfall and temperatures. The National Weather Service (NWS) hydrologists run model after model to consider possible scenarios that will help communities prepare. Early in March 2011 the NWS began to hint that the Mississippi and Minnesota rivers would combine to break the all-time 196

As a part-time riverboat pilot and a part-time substitute teacher in St. Paul, I used my time off during spring break in late March to visit the Padelford Riverboat crew at their wharf barge on Harriet Island, across the river from downtown St. Paul. I wanted to help them prepare for this threatening flood. I barely needed my rubber boots to make my way down to the dock on Friday March 24 to check up on Captain Gus Gaspardo and the boys. They had moved the boats around so the pointed bow of the Jonathan Padelford was on the upstream end of the dock. Gus hoped this would deflect any ice or drift that came downriver. The St. Paul Parks Department was busy setting up cement Jersey barriers to protect the Harriet Island Pavilion and moving all the trash containers and benches to high ground on the levee.

Typically a flood doesn’t affect us much in St. Paul. We live on bluffs above the river, except for the new condos built downstream of the High Bridge across the river from Harriet Island. As for the floodplain, there is a substantial levee protecting the industrial zone abutting Harriet Island. Harriet Island itself only floods when the St. Paul gage rises above 18 feet. The Holman Field Airport, across from Dayton’s Bluff, has been underwater often in the last 20 years, but now it has a flood wall system that can be quickly assembled to keep the runways open. The only serious threat is to the water treatment plant at Pig’s Eye.

Having spent my entire adult life on the Mississippi as a towboat pilot, then teaching youngsters about the river aboard the Science Museum of Minnesota’s River Eye and lately as a captain of the Jonathan Padelford sternwheeler, I have always been fascinated by a rising river. Handling a boat in the eddies and cross-currents of fast water will test your nerves and skill.

As the water was rising the last week of September, one large snag smashed into the Betsy Northrup passenger barge. We were readying for afternoon trips when a loud crack startled everyone on the dock. A couple of stout branches jutting out of the water broke a couple windows and tore several feet of steel hand railing loose.

This spring brought a curious lack of flotsam. Cakes of ice crowded the river bank to bank as the initial melt brought the river up to minor flood stage of 14 feet. Then we waited for the driftwood, but there wasn’t much. I was taking pictures when Gus and I spotted one decent sized tree with a few spidery branches out of the water drifting under the Smith Avenue High Bridge. It seemed to be floating down our side of the creek.

“I sure hope that one doesn’t break any windows.” Gus squinted upstream.

“Careful Bob those branches are going to get you.”

Focused on the view finder, I hadn’t noticed how close it really was. Doing my best to scramble out of the way and still catch the action on video, I hopped up onto one of the timberheads ready to throw myself inside the handrails. It hit the end of the barge, and the branches snapped as they shoved through the gaps in the heavy-duty railing. They knocked over a garbage can and swept shovels and loose ends around as the current caught the tree and washed it around the corner. We peered around the corner as it was swept away towards the bow of the Jonathan Padelford.

“Damn it’s going to get the windows!” yelled Gus.

It bumped the steel bow and looked about to clear without poking out any of the first-deck windows, but one of the stouter branches snagged the guide line of the swing stage. The one-ton gangway bounced like a rubber ball when the line finally snapped free.

A Flood of Memories

That reminded me of 1997, when the river rose quickly to over 22 feet, a major flood stage that tied up the harbor towboats for a week.

One day I walked across the Omaha Railroad bridge between St. Paul and Lilydale with Glen Carlson and our dogs Scupper and Kirby. We watched water about eight feet deep run down the river road through Lilydale. Some railroad employees, checking the integrity of the bridge as water ran just inches below the tracks, told us to get off, so we made our way back across towards Randolph Street. Halfway back — unable to hear each other for the roar of the river around the piers — we watched in amazement as a tree hit one of the piers and cracked in two.

For a pilot pushing barges, dealing with floods is relatively simple: as the river rises, cut back on the tonnage or number of barges you push around (unless your dispatcher is a dink with a chip on his shoulder, which describes most dispatchers). And when the river gets too high to run, just tie everything up and wait it out.

The crest of 1993 wasn’t as high as 1965 or 2001, or even 1997, but the crest came much later and the river was high all summer long. Barges had been moving up and down the Upper Mississippi in fits and starts.

The flood was worse farther downriver, in Iowa. A tow headed for St. Louis had turned around at La Crosse, Wis., and returned to St. Paul with 12 loaded barges rather than get caught in a huge surge with no safe place to ride it out. These extra barges proved too much for our South St. Paul fleets, and they broke loose and caused havoc while towboats scrambled around gathering them. Complete disaster was narrowly avoided as one crew stopped a couple of loads before they crashed into the I-494 Bridge.

The river got to 19.5 feet in 1993. Way down on the list of major floods, it was remarkable for the timing of the crest. The water got high and fast in the spring and stayed high all summer, with the biggest crest arriving at the end of June. The day it crested some genius of a dispatcher thought it would be safe to have me take two loaded barges from Dayton’s Bluff down through Pig’s Eye Bridge to a terminal in Inver Grove. As we slid through the open bridge, I found myself looking down at the bridge tender I normally had to look up at. Below me the massive iron bridge seemed unusually small and the bridge tender had a bald spot I hadn’t noticed before. When we slowed down to turn into the barge terminal below the I-494 Bridge, the current slammed both barges and the boat into the trees as easily as a leaf blowing in the wind. Fortunately a backup towboat had been sent along, and they rescued us. 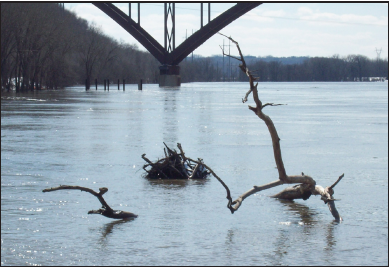 For businesses that deal with passengers and scheduled charters, things can be a little trickier — like last fall when the NWS said the water would rise over 20 feet. Captain Gus canceled two weddings for a couple of tearful brides when St. Paul officials shut down our dock because of the NWS predictions. The actual rise was several feet less than predicted.

So on the last day of spring break, Sunday, March 26, the river was up enough to encroach on the upper end of Harriet Island. The parking lot had a few inches of river over it, so we parked on the levee. By now there was a slight cross-current running through the archway of the ticket office tugging at my rubber boots as I waded onto the ramp of the floating dock.

Someone had to decide whether or not to cancel the production of “Cabaret” scheduled for the Showboat that weekend. Over the course of the late morning and early afternoon we watched the river surge up and down a few inches at a time. Could that mean she’s cresting?

Gus thought about it a few moments. “Well I didn’t think it would get much over 17.5 or 18 feet, but she might get to 19. There is just not enough water in the system to justify that kind of a panic.”

Gus explained that “Mankato crested at 23 yesterday, and last year their crest was 28.25, and the water here at Harriet Island never got over 18 feet.”

The television news and newspapers began to panic. After weeks of overwrought warnings the much-ballyhooed big flood was about to fizzle. Sure 18 or 19 feet is good high water, but it is not especially newsworthy and certainly not worthy of the attention they lavished on it. So they all bit hard when the hydrologist hinted that, sure the river had fallen short of predictions, but hang-on, the second rise would justify all the preparations and near panic.

So Gus made the decision to shut down the play for Saturday and Sunday, March 26 and 27, costing the theater company several thousand dollars. The city disconnected the sewage, so Gus had no choice. The water rose just enough to foul everything up. It caused more trouble for St. Paul by threatening to go higher than if it had actually made an honest attempt to break the record.

Gary Meyer and Gus gave me a ride from the dock down to the showboat mooring aboard the small work boat Little Ugh. For the next week she would ferry the crews back and forth to the dock to save wading through the water covering the river walk. The media crews left. The river would crest in a few days well short of the much anticipated and hoped for flood.

Someone speculated, “Well maybe they’ll get their wishes on that second crest.”