Return of the Voyageur Canoe 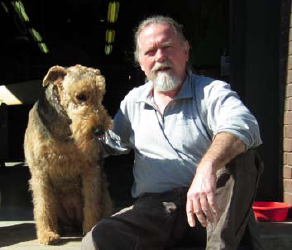 Dennis Davidson and Ella on the steps of his shop at the former
headquarters of the Northern Pacific Railroad.

The first white fur traders quickly learned that the bark canoes of the Native Americans were far superior to their small boats and over time developed larger, “canot du nord” models. A modern version of these formidable boats once again plies the Upper Mississippi, but the hardy French voyageurs paddlers have been replaced by schoolchildren.

Al Gustafson started NorthWest Canoes in his garage, near Lake Phalen in St. Paul. Needing more room to build bigger canoes, he moved his business to St. Paul’s warehouse district in 1991. Once he was moved into Lowertown’s Northern Warehouse he began building cedar-strip versions of the traditional voyageur “canot du nord” style canoes.

It is not hard to picture early explorers landing on the nearby Mississippi River bank where steamboats would one day deposit settlers and goods for the community that became St. Paul. After the Civil War, when railroads had extended their reach across the Mississippi to criss-cross the country east-to-west and north-to-south, the Mississippi River at the Lower Landing in St. Paul was virtually cut off from the city by railroad tracks.

The Northern Warehouse was built across the tracks from the river in 1878. In 1896 the interior was redesigned by famed architect Cass Gilbert, and the warehouse was remodeled to house the headquarters for the Northern Pacific Railroad.

The present owner of NorthWest Canoes, Dennis Davidson, finds it ironic that he builds these voyageur style canoes in a St. Paul warehouse where the railroad empire builder James J. Hill might have overseen the loading and unloading of steamboat and rail freight. “In fact the shop floor here once held the rails where trains rolled right through the warehouse to unload coal,” Davidson pointed out.

The voyageurs used large doublewide canoes to transport furs on the northern rivers in the 1700s and 1800s. The river models were about 25 feet long, four feet wide and weighed upwards of 300 pounds. These hardy cargo craft used birchbark technology developed by Native Americans. They were designed to hold a sizable load of furs. The broad beam allowed paddlers to sit side by side. 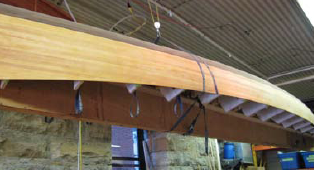 NorthWest Canoes has resurrected these ten-person designs for that reason. One day, while still working out of his garage, Gustafson decided to build a big canoe out of curiosity. His friend Greg Lais, founder of Wilderness Inquiry (WI), bought the first big canoe to help Gustafson out. The men trusted fate to find a purpose for these small behemoths. As luck would have it they were perfect for Wilderness Inquiry’s mission.

Davidson sees it this way. “The beauty of these bigger canoes is they only require one good paddler — one captain is all it takes. If you are trying to give a bunch of city kids a wilderness interpretive experience with smaller canoes, it takes several canoes each with its own guide, and pretty soon you have groups scattered all over the water. A big canoe takes one captain and the group is in one boat.”

It is impressive to watch the boat captains of Wilderness Inquiry take a band of city kids who have never been in a canoe and quickly turn them into an effective paddling team.

The canot du nord design of North-West Canoe utilizes a cedar-strip hull rather than the traditional birch bark, but the size and spirit is the same. It is hard to picture the long narrow shop holding these big canoes. “We move all the other projects out for the days when we start laying epoxy and material over one of those bigger hulls. And we wear state-of-the art respirators with that stuff.”

The ten-person style and construction has evolved from Gustafson’s first prototype. “We had his first one, the V-1, in here for some maintenance, and it was much heavier than what we make today. It had three-eighths-inch planking and a thick layer of fiberglass matting and resin inside and out. Those early canoes were made of red cedar.”

Davidson worked for Bell Canoe in Zimmerman, Minn., when he joined Gustafson in 2006. “Al wished to retire so I bought the company in 2007, and we have made a few modifications to materials and design. Now we use quarter-inch planking, epoxy the outside and use a foam core under fiberglass in the inside. In the bottom of the canoe we add a thin layer of carbon fiber, which affords a good deal of stiffness and strength to the bottom. These days we use white cedar from Michigan’s Upper Peninsula and eastern Wisconsin. The white cedar from Minnesota grows in bogs and is a wet wood. But the UP and Wisconsin cedar grows in sandier soil and is still local. The older canoes have patina to a dark chocolate color, and new boats look almost blonde floating next to them. Gustafson’s boats had a round bottom, and we flattened that out and went a bit wider for more stability.”

Wilderness Inquiry is the main customer for these big canoes, but Davidson plans to expand his market as other organizations discover the advantages of using these large vessels with big groups. “WI had 16 of these big craft when I started and plan to build the fleet to 30.”

NorthWest Canoe and WI are devoted to seeing that urban youths have a chance to experience wilderness on the water. One way Davidson does this is to partner with Urban Boatbuilders, of St. Paul. “We work with Phil Winger at Urban Boats to hire interns. At Urban Boats they learn boatbuilding skills, and then we take them and introduce them to the same thing as a small business model. They work with the customers and get a feel for what it takes to outfit and run a shop.”

Across Kellogg Street from the NorthWest shop is the former Lower Landing and Lambert’s Landing, where steamboats once landed to swap cargo. Today the big diesel towboats wait there for barges they will push to St. Louis and New Orleans. Davison would have to cross a busy street, scale a three-story parking complex and ford several railroad tracks to even see the river. He wishes that his warehouse had a direct connection to the Mississippi.

“Part of the 50-year Great River Plan is to re-expose the creek running through Swede Hollow and make it accessible from the Bruce Vento Park. I would love to cart a canoe I built right
across the back of the warehouse district a few hundred feet and be able to put in and be out on the Mississippi River in a few minutes.”