Dawn and Andrew relax on the porch of Toad Hollow.

There is a small community of live-aboards at the marinas up here in St. Paul. One of them is a tough young woman who has faced the challenges and learned to love the life and the tough times.

Dawn Brodey has earned the title of captain. Last year she and her partner, Andrew Melby, piloted her 43-foot Nautaline houseboat, The Road, to the Gulf of Mexico to put it up for sale. From Watergate Marina in St. Paul they traveled the length of the Upper Mississippi River, took a left at the Ohio River then followed the Tenn-Tom waterway to Mobile Bay.

Dawn has lived aboard a houseboat at Watergate for going on eight years, including seven Minnesota winters. When she sold The Road she and Andrew moved into a two-story houseboat also in Watergate, the newly remodeled Toad Hollow.

As far back as she can remember, Dawn wanted to live on a houseboat. Her family had limited means, so vacations were always camping trips. The summer she was four years old, her dad presented the family with a plan to rent a houseboat on a lake. Four-year-old Dawn thought he was nuts, but when she saw photographs of the boat she was hooked.

“My sisters and I were big into pirates. All our play was about pirates, and of course on Halloween we were pirates. I remembered everything about that boat even though we had to bail on the boat and ended up just regular old car camping. But I fantasized about that houseboat for years.”

In 2001 Dawn went to work at Padelford Riverboats in St. Paul. In the winter she answered phones and arranged charters for the next season. She spent most of her time back in the machine shop listening to Capt. John Halter spin yarns about his years in the Coast Guard and working on the towboats in the St. Paul harbor. The traveling bug was biting Dawn, and she let slip to John that she was thinking about buying a small camper, like an Airstream or a Winnebago, to live in.

“I am a bit of a comittmentaphobic, and I was embracing the idea of being free to just up and leave if I got a wild hair.”

John listened and then told her, “No, what you want is to live on a houseboat.”

The idea of living aboard awakened that old fantasy, but what would she do in the wintertime? He told her about his winters living on houseboats in the St. Paul Yacht Club marina.

“Capt. Halter was right, of course. I was divorced and broken hearted. That’s a pretty common theme among live-aboards. I know several that are living down here to heal. And the river does have restorative powers.” But she also learned about the challenges to living on a boat year-round.

The first winter aboard The Road was terrifying. Dawn found out later that a few of the marina folk had started a pool to guess how long she would last. To keep the fiberglass hull from being crushed by ice, she placed bubblers on the corners to agitate the water and diminish ice accumulation. A couple of the bubblers failed and she spent many nights arising every couple hours to chip ice with a pike pole. 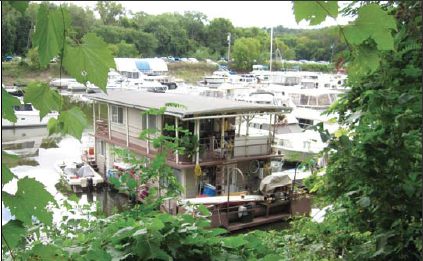 Toad Hollow sits surrounded by summer greenery at the marina.

“I was scared to death when I would fall asleep between chipping sessions and then get woken up by the sounds of ice outside when it would crack and boom.”

She made it through the winter of 2006-2007 and was rewarded with her first summer living aboard. She was seen piloting The Road around the St. Paul harbor standing proud at the wheel on the flying bridge.

Then the traveling bug began to bite harder. “You watch the river flow by every day, and at the occasional bonfire parties the river slips by in the moonlight, full of mystery and adventure and a person can’t help but wonder where does it go?”

Then love fell into her lap. Dawn had known Andrew Melby for many years. He works behind the scenes at local film and television productions and he was smitten with Dawn a long time before she realized one day that she too had strong feelings about this handsome cameraman.

Once she had recruited her first mate Dawn began seriously thinking about taking a long trip with The Road. They explored the possibility of turning the adventure into a commercial venture. Television networks were interested in a show about exploring America’s greatest icon. National Geographic, the History Channel, Discovery Channel and Travel Channel and a few others nibbled at the idea, but every one of them balked at the notion of a female captain.

“They weren’t interested in having a woman host a river/road show. They wanted to hire a man to drive The Road, and I could be in the background as the hapless female help. No way! That was my boat, and I was the captain!”

Those television producer gurus missed an opportunity to showcase the Mississippi in all its glory in the backdrop of an adventure. Dawn, Andrew and Dorothy (the boat dog) overcame numerous obstacles on their trip — from engine problems, nasty weather, dodging tows without getting swamped by the huge wakes, as well as the simple wear and tear on their nerves. And then there were the logistical challenges of attending to Dorothy’s special needs in a timely way.

Not surprisingly, Dawn, an accomplished playwright, produced an entertaining blog of the trip and her winters in the marina. [dawnbrodey.com]

Once The Road made it to the Gulf, Dawn returned to St. Paul, where she set up house on her second houseboat. Besides being a river rat, Dawn is a fulltime actor and playwright with gigs to perform. Andrew stayed behind to prepare The Road to sell.

Living on the river has not only aided her creativity but has afforded her some credibility in seeking roles on the stage. “Directors and producers hear that I live on a boat, and about the big trip down to the Gulf, and they remember me. I don’t know if it gets me any more jobs, but being remembered is a big deal in this business.”

She has been a busy actor and writer since returning, aided in part by the peaceful setting of Toad Hollow. For years it was tied to trees in the shadow of a railroad bridge adjacent to Bohemian Flats, up in Minneapolis. River rumors had it that the previous owner was a very colorful character who made her living far out of the mainstream.

Now nestled under a forest of cottonwoods at the far corner of the marina, Toad Hollow has been given new life by the skilled hands of Andrew. Off of the second floor bedroom overlooking the stern under a canopy of trees is a secluded porch where the two can escape and work on projects or discuss ideas away from the bustle and noise of the city.

“Living at Watergate on The Road, I fell in love with this spot. Across the river is historic Fort Snelling and I have spent hundreds of hours exploring the river bottoms of Crosby Park and Hidden Falls.”

She and Andrew may decide at some point to trade Toad Hollow for a home on dry land, but the Mississippi River will forever be in her blood.