Stayin’ Safe on the River: Big Boats and Right-of-Way 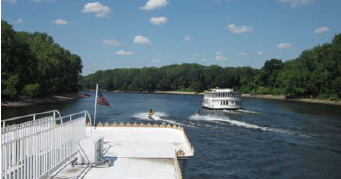 A large commercial vessel would have a hard time steering around or stopping for a fallen water-skiier.

One of the most unnerving things a river pilot can see is a small pleasure boat disappearing from view in front of the bow. A rowing scull crew crossed my bow one day as I was maneuvering in high water to pass downstream through a railroad bridge. I threw all three main engines into reverse, but we were so close the barges wouldn’t even slow down. Within seconds the scull disappeared from view in front of my front barge, 600 feet ahead.

Fortunately for those eight men, they realized their mistake just in time to accelerate to a speed they had never before achieved. Lonnie, the bridge tender, hailed me on the radio to say they had been so close to being run over that the coxswain could have touched that barge.

Water-skiers make the hair on the back of my neck stand up. In 40 years in the harbor I cannot recall the number of times I have seen a boat pull a skier past my boat then decide to circle my slower moving vessel. I’m sure the number is in the hundreds. Dozens of times I have gasped in horror when a skier fell in front of my tow. So far, I have been lucky and was able to slow down or steer around enough to avoid running over any of them.

One evening in 1991, my deckhand, Jimmy Hoffman, and I were sitting on the tailgate of the company truck beneath the High Bridge watching the night crew leave with some empty barges. Before they even had much headway two guys in a speedboat plowed straight into the front barge. The crew was able to rescue both men, who were shaken up but otherwise stone cold sober.

I have seen many jet skis frolic dangerously close to the wake and wheel wash of towboats. One afternoon in 1996, Tim Harp was piloting the J.L.Fleming pushing six loads in the narrow channel of the Minnesota River, as I stood next to him pouring a cup of coffee. I dropped my cup as we watched in horror as a jet ski ran across the front barges and crashed into one of the barges. The young man driving the jet ski was in the hospital for over a year and probably still isn’t right. Tests confirmed that he, too, was sober.

A towboat pushing barges might seem slower than a speedboat or even a houseboat, but a towboat cannot easily overcome its huge inertia. A tow steering a bend or shaping up for a bridge span can throw the engines into reverse attempting to avoid hitting an errant small boat, but doing so might cause the pilot to lose control and run aground or hit a bridge pier. No captain wants to be in the position of deciding whether to run over a small boat or to take out a bridge.

Recreational boaters are not required by the Coast Guard to know the “Nautical Rules of the Road,” but a review of these rules might avoid nautical faux pas and prevent some dangerous situations.

Some boaters are obviously under the impression that all they need to know about the rules is that unpowered vessels have the right of way over powered vessels. While this is true, if they actually read all the rules they would discover that a “vessel restricted in her ability to maneuver” has the right of way over all other vessels — powered, sailed, paddled or rowed — except those not under the control of an operator — a very rare situation, such as a runaway barge or a boat with a broken rudder.

RULE 3
General Definitions
(g) The term “vessel restricted in
her ability to maneuver” means a
vessel which from the nature of her
work is restricted in her ability to
maneuver as required by these Rules
and is therefore unable to keep out
of the way of another vessel.

In Rule 3, the term “vessel restricted in her ability to maneuver” would mean any commercial vessel operating on the river. The rule is in part meant to cover barges which are limited to the channel because of their deep draft. Trying to dodge small boats by leaving the channel won’t work. The local harbor towboats in St. Paul pushing barges and the passenger vessels are also restricted in their ability to maneuver, because of our narrow and twisting stretch of the river.

As a green pilot many years ago, I ran aground dodging a wayward houseboat meandering down the channel without running lights after midnight. Needless to say, the boss was unimpressed with my story of saving the lives of the houseboaters. The only way he would have believed my story is if I had shown him a sunken houseboat.

RULE 8
Action to Avoid Collision
(b) Any alteration of course and/or
speed to avoid collision shall, if the
circumstances of the case admit, be
large enough to be readily apparent
to another vessel observing visually
or by radar; a succession of small
alterations of course and/or speed
should be avoided.

RULE 18
Responsibilities Between Vessels
(a) A power-driven vessel underway
shall keep out of the way of:
(ii) a vessel restricted in her ability
to maneuver.

Rules 8, 9 and 18 refer to the most common encounter between commercial craft and pleasure boats: the
head-on meeting. The scenario refers to a situation where a towboat pushing barges or a passenger vessel is pointing right at a yacht, small speedboat, jet ski, canoe, kayak or a rowing scull. A small boat operator who understood the rules and situation would know that it would be unwise for the commercial vessel operator to steer back and forth trying to ascertain the intent of the smaller boat.

The commercial pilot would like to see the small boat turn to point clearly at one bank or the other and lay a course that takes it along the outside of the channel.

Rowing sculls often cause problems for two reasons: First, they are rowing forwards while looking backwards, which is fine as long as the scull is the only boat on the river. (Who came up with this idea, anyway?)

Second, they live under the misconception that they have the right of way, which they don’t.

I was on a field trip several years ago at Whitewater State Park with a group of teachers. After the day’s activities, we were having dinner around the campfire when one of the teachers mentioned that she had been a member of a Twin Cities rowing club. When I mentioned that I knew of the club from being a towboat pilot she announced, “The barges always get in our way!”

Last season I had a short trip with the Anson Northrup pushing the Betsey Northrup passenger barge. One of the passengers introduced himself as a coach of one of the local rowing clubs. Scullers were spread out before us in the middle of the channel. All of us were heading around a corner to look downriver at a railroad bridge. He said that they would indeed move out of the way before I needed to shape up to steer through the navigation swing span.

I quipped that that would be a first. He insisted and said I shouldn’t worry because, after all, they have the right of way.

I nearly choked on my coffee, then I quickly explained that since we were restricted to the channel leading through the span — indeed, we could not fit under any of the other four spans — that they certainly did not have the right of way. Furthermore, I was moving faster and would have to slow down or stop if they kept their course.

He replied that they have been instructed to move over to the left side of the channel once they were through the bridge.

We slowed down and I steered a course straight to the navigation span. Upon clearing the bridge two sculls broke left and proceeded to clear out of the channel. One stayed in the channel and the fourth stopped rowing altogether, right in front of us! The puzzled look on his face turned red as I looked at him and shook my head. Blowing the danger signal, I reversed engines above the bridge.

I explained, “Now with this boat we should be okay backing up above the span, but if I had a bunch of barges in front of me, we would lose control while the boat is trying to stop and the current would probably take us into those piers on our left.”