21st Century Steamboats on the River 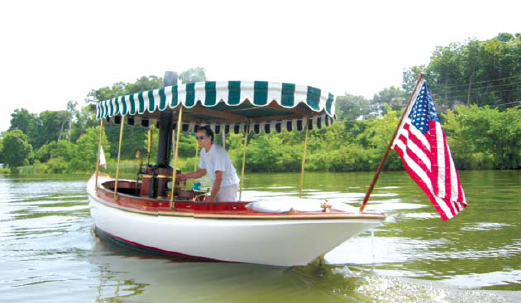 Tim Reichel takes his steam-powered boat, the Isabelle, out on the Mississippi.
(xx)

Folks at Harriet Island Park this past summer were treated to the unmistakable toot of a steam whistle. Seconds later on this sunny, cool August afternoon the aroma of burning wood caught my attention as I was getting the pilothouse of the sternwheeler Jonathan Padelford ready for a sight-seeing trip around St. Paul. Out in the channel a pair of beautifully outfitted Victorian-style launches steamed quietly past. One, the Isabelle, sported a striped canopy while the Erich J was uncovered.

For a moment they were close enough for me to ask what kind of wood they were burning. One of the operators answered that they were burning apple wood. Then they were gone, and I had lost my opportunity to learn more about these visions from a different time. Then a small speedboat idled by slow enough for us to talk about the launches. I motioned for them to turn back and asked them to give one of the launch pilots my phone number, should they catch up with them. A few weeks later I got a phone call from the captain of the Isabelle, Tim Reichel.

Reichel’s first steamboat was a side-wheeler with a wooden hull, but he has changed his ways. “My new one is a fiberglass hull. I’ll never have a wood boat again. Keeping up with the rot is too much, and hauling it around on a trailer to all of the steamboat gatherings is too hard on it. The side-wheeler didn’t steer too well. She was the Vada Grace. I built her in my garage over 20 years ago. She was powered by a small gas engine. Steering was a rudder and using the side wheels. It was a sharpy-hull and drew only four inches. She was only six feet wide and the paddles only seven feet apart. Our top speed was about 13 miles per hour, but she had a huge turning radius.”

Reichel’s love of boats began as a child when his family had a summer cabin in Mankato, where he and his brothers spent time canoeing and exploring the Minnesota River.

“We had a canoe and my brothers were hunters. They would shoot ducks and I was the dog, retrieving them with the canoe. After big floods we would go down and snoop around for debris. Many times we spotted exposed keels of big boats. They must have been old steamboats. That got me started spending time in the library looking up the history of the sternwheelers that went up the Minnesota River.”

Later his dad taught the boys to sail on lakes around Mankato. “Then he got bigger boats, which we sailed on Lake Pepin out of Lake City. I remember the old inner harbor had all covered slips, so we tied the sailboat up alongside of an old railroad barge ferry. I see now where it is pulled up on the bank, I think north of town, rotting away.” 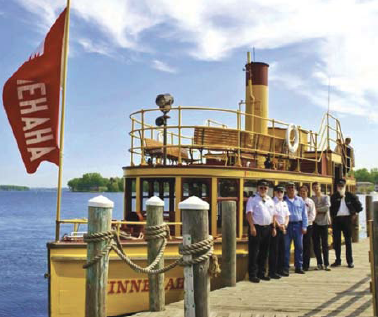 The Minnehaha was rescued and restored in the 1980s. The Museum of Lake Minnetonka offers cruises to the public. (MSM)

Reichel’s love of steam began in the late 1980s, when he was enlisted as a volunteer in the restoration of the steamboat Minnehaha.

“I am a painter and was working on a job at the old Pillsbury Mansion when I heard the guys talking about a boat they had just pulled off the bottom of the lake. It was sitting in an old barn. So after work I stopped by and walked in wearing my work clothes. One of the guys says to me ‘Are you here to look or work?’ I made the mistake of shrugging my shoulders, and I spent my free time for the next several years helping to restore the boat.”

The Twin City Rapid Transit (TCRT) Company ran from St. Paul across the river through Minneapolis and terminated at Lake Minnetonka, on the west edge of the metro area. The steamboat Minnehaha carried commuters around and across the lake from 1906 until it was sunk in 1926. 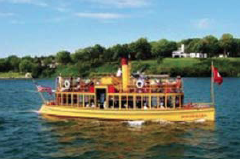 The Minnehaha out on the lake.

The TCRT ran seven steamboats until automobiles became the preferred mode of commuting. The Hopkins was sold to the Blue Line Café, which ran it as an excursion boat until it was scuttled in 1949. Eventually the Harriet and Stillwater were dismantled. The Excelsior was converted to a lake tug. In July 1926 workers dismantled the Como, White Bear and Minnehaha, filled the hulls with bricks from demolished buildings and the tugboat Priscilla towed them out into deep water. Somewhere between Big Island and Bracket’s Point they were scuttled and sunk.

The Minnehaha was found in 1979 by a diver named Jerry Provost, half buried in thick mud 60 feet down, but the cypress hull seemed to be in good condition.

Bill Niccum, the owner of a dredging outfit, was enlisted to raise the old hull. Elaborate efforts began in August 1980 involving eight large air bags. The mud had such a hold on the hull that it took three barge-mounted cranes and the flotation bags to break it free.

Restoration was a labor of love that started with researching old boatbuilding techniques. No plans were to be had, so replacing the old solid oak ribs with new laminated oak ribs and replacing all the main timbers fore and aft was quite a task. By 1996 the hull and topsides had been refurbished and the old 70-by-15-foot floating streetcar steamer was running once again.

“During the project I took the class and received my State of Minnesota steamboat license. So I pulled the gas engine out and retrofitted the Vada Grace with an antique steam engine and boiler. Fourteen years ago I sold that boat to a buddy from Atwater. He in turn had it stolen from his barn. Someone took down the power line to his barn, loaded up all the metal stuff from the barn and hauled it away with a minivan. My brother-in-law actually saw the thing going down the highway and waved to the thieves. Had he known what was really happening, the boat might have been recovered.

“After that I built a fiberglass hull. I like coming down to the Mississippi with the steam engine. Sometimes the boaters on Minnetonka complain about the smoke. Sometimes I will burn coal under the boiler, and they don’t care for that. It gets so crowded out there it is nice to steam on the Mississippi and go up the Minnesota River. We put in at Watergate, in St. Paul, and will turn up the Minnesota at Pike Island [mile 844.0]. The boat only goes about five miles an hour, so we’ll get up to the 169 Bridge [mile 25], the head of practical navigation. That’s a full day for these steamboats.”

The new boat’s propellor is turned by a five horsepower engine with a piston three inches in diameter with a four-inch stroke. It runs quietly, making only a clicking noise, because it doesn’t send the steam up a “scape” pipe, like the old paddlewheel steamboats. The closed system recycles the water after the steam cools in a condenser in the keel before it returns it to the boiler. He used to have an open system that he replenished with river water, but Minnesota River water foamed up and caused problems.

Reichel and his steamboating buddy Paul Nestburg, owner of the Erich J, spend about 10 days each summer steaming around the Port of St. Paul and going up the Minnesota. The Upper Mississippi Steamboat Group, a loose confederation of steamboaters from Minnesota, Illinois, Michigan and Wisconsin, occasionally stages a get-together. Reichel also takes the Isabelle all over the region to gatherings and even spends time steaming around the Apostle Islands out of Bayfield, Wis.

Bayfield, Wis. I am looking forward to riding along and experiencing the sensory delight of steam power first hand next summer. 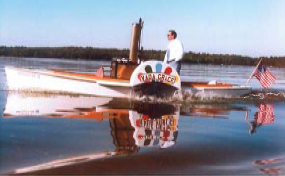