The largest towboat built in the U.S., the MV Mississippi, docked at St. Paul’s Lambert’s Landing over the first weekend in August on its mission to educate the public about the role the Army Corps of Engineers plays in flood control, maintaining a commercial navigation channel and — in these enlightened times — partnering with various groups to do its work in a more environmentally responsible fashion.

About every three years the Mississippi leaves its home port of Memphis for an inspection of the Upper Mississippi. It arrived at Lambert’s Landing August 5. I had seen the vessel from afar, but I was unprepared for the breathtaking size of the thing up close, but, having grown up on Air Force bases, I knew what to expect inside: a lot of neutral colored tan paint, functional décor and everything so spotless that a germaphobe could eat off of any surface without so much as a wince.

The boat hosted an open house on Saturday, August 6, attracting over 500 people to inspect the huge towboat. Then the Mississippi River Commission (MRC), a board comprised of Corps and civilians, held a public hearing on Monday, August 8, to learn about local concerns on river-related issues.

The Mississippi is the fifth Corps riverboat with that name. This one, commissioned in 1993, is 241 feet long and 58 feet wide. The hull is 12 feet deep and sits about eight feet in the water. The pilothouse atop four decks is 52 feet high.

It can hit 15 mph in slack water when it’s not pushing a tow. When it’s on the lower river pushing a tow of concrete mats used to protect the river bank, she can make eight mph in slack water. It’s powered by three Caterpillar 3606 diesel engines turning three five-bladed propellers, each 93 inches in diameter, with a total of 6,300 horsepower.

Did I mention that you could eat off of the engine-room floors? The crew of 39 services, cleans and paints constantly. A number of Corps personnel I saw wore airborne wings on their coats — impressive credentials.

When the “2016 Low Water Inspection Trip” hearing convened, it marked the 396th meeting of the MRC. The commission was established in 1879 and refocused after the Flood Control Act of 1928 to maintain a navigable channel along the length of the river. 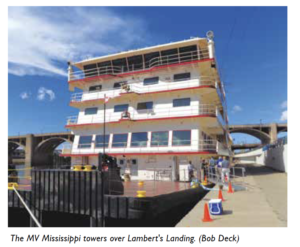 Maj. Gen. Michael Wehr, commander of the Mississippi Valley Division of the Corps and president of the MRC, proudly stated that the modern MRC members are also dedicated to environmental restoration. He explained that the Corps is a government agency and does not lobby Congress, but does as it is directed. However, through its involvement in the MRC, the Corps has a voice, along with the civilian board members, to ask for projects and offer direction.

The MRC board includes three civilians: Sam D. Angel of Arkansas, R. D. James of Missouri and Norma Jean Mattei of Louisiana. James and Mattei are civil engineers. The Corps board members were Wehr and Brig. Gen. David Hill. One Corps member and the NOAA member did not attend.

When it was the public’s turn, Eric Otterness of St. Paul talked about the sediment load of the Minnesota River and how it’s made worse by farmer’s tiling their fields. Then he veered sharply off course, complaining about all the logs jammed up against Raspberry Island. There is a big raft of trees and odd pieces of driftwood that have become so tangled up that the wood extends well beyond the width of the island and across the back channel to block the St. Paul Yacht Club docks.

“The Minnesota River Valley is wide, and the river meanders, and there are cut banks in every bend. Trees fall in each time the river rises. Whole trees with leaves and roots float down out of that river and end up lodged on the upstream end of the island. I’ve seen teenagers walk out on the log jam. The head of the island is a choke point for debris,” he said.

It is expensive to charter a towboat and barges with a backhoe to collect and haul the wood away. That cost falls to the yacht club for the most part, as the state and city won’t foot the bill. Otterness would like the Corps to clear this stuff periodically, even though it is not on the Main Channel.

Next, a long-time acquaintance, Lee Nelson with the River Industry Action Committee, talked about the study for a proposed dredge cut across some bends above Lock and Dam 2 at Hastings, Minn. The meandering channels have deteriorated over the years to the point that in 2014 a high water event left the channel badly silted in. Southbound tows were limited to pushing six barges instead of the usual 15 until the Corps could re-establish the channel, which took several weeks.

These days that channel requires near constant dredging after floods. Tows that used to leave St. Paul with 15 loaded barges are now limited to 12, and at low water only nine, because of the narrower, shallower twisting channel.

The shipping industry, represented by Nelson, believes that a cut following the an old channel, Boulanger Slough, along the Schaar’s Bluff/Ninninger stretch along the west bank, would straighten out the channel for several miles.

At first glance this might seem to be the logical solution, since Boulanger Slough has remained fairly deep, over 12 to 18 feet, but construction of the lock and dam dramatically changed the natural hydrology of the Spring Lake area from when this broad stretch of the river was full of wooded islands and narrow sloughs.

It seems a simple matter then to dig out the upper and lower ends of the new deep straight stretch and run tows right down under the bluff to the lock. One of the controversies brewing in the background concerns sediment load. The Minnesota and Wisconsin departments of natural resources and other engaged stakeholders are concerned about the increased amount of sediment that will be sent downstream to Pool 3 and Pool 4, especially Lake Pepin. Property owner on both sides of lower Pool 2 are also worried about how changes might affect their river access.

There was another issue, casually mentioned by a few speakers, that has the potential to ignite a genuine firestorm in the future. It was brought up so casually that it seemed to glide right under most people’s radar. I almost missed it myself.

Now that the Upper St. Anthony Falls lock is closed, people are asking the Corps to turn the ownership of the three locks and dams between Minneapolis and St. Paul over to the city of Minneapolis, so the Corps can reallocate the funds used for operating and maintaining them to other projects.

Now that would be a real pot stirrer, believe me.