A Pirate Prowls the Urban River

A few seasons ago, a pirate ship appeared in the port of St. Paul. Not so much a river pirate as a Pirates-of-the-Caribbean variety.

Last fall, I discovered someone who knew Pirate Dan and gave me his contact information. If the pirate won’t come to me, I will go to the pirate.

Dan was cleaning up around the dock when I arrived. This tall, fit-looking mariner had a sparkle in his eye that befit a fun-loving pirate. He showed me around Siren’s Gate as I asked what led him to a pirate’s life.

He told me his story — frequently peppering his answers with a hearty “arrr.” Dan Kellogg was raised to be a river pirate. He grew up part-time in Minnesota and part-time in the Bahamas. His father, Terry, taught English and history on Harbour Island, Bahamas. Dan spent some of his time there learning about pirates and collecting pirate artifacts.

Years later, his collection was crowding him out of his home, so he Googled “pirate boats for sale on the river” and found an intriguing ad. A carpenter in St. Louis had been commissioned to convert a 65-foot, 1988 Gibson stretch houseboat into a replica of a pirate ship. Then the boat owner dropped out of the project.

Dan bought the vessel. He piloted it upriver a few years ago and has been using it to treat kids with special needs to a taste of good, old-fashioned river pirating. When he isn’t living aboard, he rents the boat as an Airbnb for $300 a night. It must remain dockside, but the kayaks and paddle boards he keeps there are available for exploring the river around the marina and Pike Island.

Every inch of the vessel is saturated with pirate. An umbrella stand is stuffed with swords and cutlasses. Attire and accessories for the welldressed privateer are everywhere. Skeleton pirate crew members stand at the ready from bilge to crow’s nest. A large-screen TV stands ready to show movies on the poop deck. The most popular films star Johnny Depp — go figure. 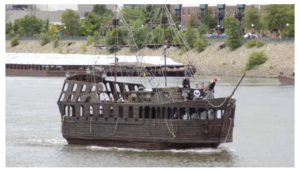 In Minnesota, young Dan was often entertained by the future Arctic and Antarctic explorer Will Steger, a high school classmate of Dan’s father. Will’s stories of his early exploits inspired young Dan to explore the river.

“When I was about 8 we were spending the night at Will’s main cabin on Pickett Lake, and it was late, cold and dark. He said, ‘Dan, go fill the water bucket from the lake.’ I was scared of the dark, but I also knew that Will was king of the woods, so it all balanced out. It is still today a strong memory and such a little thing at the time that probably became a huge stepping stone for my personal growth and willingness to venture out and control my fears. When Will was 16, he motored a boat down the whole Mississippi River. I’m sure that was always in the back of my mind.”

In 1992, Dan and two friends kayaked down the Mississippi and over to his father’s place on Harbour Island in
the Bahamas.

From Hidden Falls Park in St. Paul to the Gulf took two months, and his route around Florida and over to Harbour Island took another two months.

There were a few close calls. The first was somewhere near the Quad Cities. A storm was approaching from behind, so they decided to jury-rig some sails.

“We were skipping across the water when the front overtook us. We got blown onto a dam. We were stuck pretty hard,” Dan recalled.

“Fortunately some people at a restaurant on shore noticed us and called the fire department. They were able to run a rope out to us and pulled us away from the dam and up onto shore.”

Another memorable encounter occurred on the Tennessee River, where they wandered into the mouth of a tributary looking for a campsite. Ahead of them a tow that was just working away from the bank to get underway was coming straight at them. In the confusion Dan and Andrew, his South African sailmate from the Bahamas, went one way in a tandem kayak, while Scott, in a solo kayak, went the other.

In the dark Dan and Andrew realized that Scott was getting pulled into the towboat by the propeller’s suction. Desperate, they found a flare gun and shot it over the tow, prompting the pilot to stop his engines long enough for the trio to regroup and paddle to safety.

Most of the time, the trip was more sanguine.

“As we paddled the river through the day, we were each in charge of developing our own fireside story for the evening. There were two requirements. It had to continue from one of last night’s stories, and it had to include an object that we passed on the day’s journey. This brought us together at night after hours of solitude in our kayaks. Our stories were great and included everything from floating tennis balls — probably from a Wimbledon final match — or teepee remnants, broken fishing line, old wrecks. Well, you get the point.”

Not one to do something halfway, he later headed to northern Minnesota and canoed from the headwaters, at Lake Itasca, downstream to Hidden Falls, to complete the journey of a lifetime.

“That presented different challenges. There is the wind on the big lakes to deal with, and being a chain of lakes and full of islands, there is no current to tell which way the river goes.

“We got lost in heavy weeds and couldn’t paddle. We had to wade through three feet of water for a couple hours till we found the channel, and then we spent an hour pulling leaches off of us!” 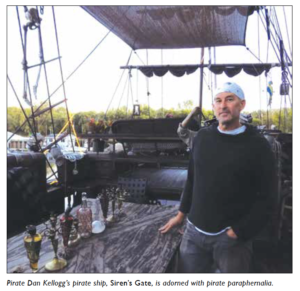 This past summer Dan sailed Siren’s Gate down to Raspberry Island, in downtown St. Paul, to watch the play “The Pirates of Penzance.”

When he isn’t being a pirate on the river, he heads to his home in Minnetonka aboard his pirate motorcycle. He still travels back and forth to Harbour Island and spends time in Cambodia helping his father work with youths in orphanages there.

Dan would like to expand his work with youth, using the boat to bring the river and a little happiness into the lives of youths who might not otherwise have access to the Mississippi.

“I would love to work with schools and offer some small, off-campus classes on things like navigation, world travels, outdoor living, sailing and adventuring.

“It would also be great to work with troubled kids and have some form of a ship therapy program helping kids deal with hard things and try using the ship as a tool to instigate sharing feelings, dealing with problems and bonding through the challenges we all have to face.”