As a towboat captain, I have seen some wild and flimsy contraptions maneuver the currents of the mighty Mississippi River, so as I made my way to Hidden Falls Regional Park in St. Paul to watch the “All Punx Float” flotilla set off on a 120-mile trip to Winona in early June, I hoped I could resist the temptation to be judgmental. Nor did I want to be the last one to see them alive.

They were everything an old guy might expect from “punks” — tattoos, piercings, leather jackets, sandals, bare feet and the occasional dreadlocks. I watched with growing fascination as this loose confederation mustered over the course of several hours that morning. After talking with several of them, I realized that there was quite a bit of river experience amongst the group.

In 2004, some friends were sitting around in Robert Wildwood’s living room in Minneapolis, when someone said, “Let’s take a trip down the Mississippi.” So began a series of punk adventures on western rivers.

The next summer, Wildwood and a small group set off from Hidden Falls headed for the Gulf of Mexico on a homemade raft. They were part of a flotilla of homemade boats that got as far as St. Louis and would have continued, if not for hurricane Katrina.

“I didn’t think anybody needed a bunch of us trolling through Cancer Alley while they were dealing with that,” he explained.

So they turned up the Ohio River and disembarked at Paducah. “A scrap dealer took my boat off of our hands.”

A year later, Wildwood and Evan Clark rafted down the Missouri River, until their raft turtled against a bridge pier.

“We lost everything, even our shoes. The trip ended with two muddy guys walking barefoot into town looking for a phone.”

This year Wildwood has rigged his canoe with a solar-powered motor.

Evan Clark, of Pittsburgh, has a spirit for adventure and love of water. He is studying to get a U.S. Coast Guard 25-ton Master’s License for Inland Waters to continue his river clean-up program at Three Rivers Park in Pittsburgh. He operates a 28-foot TriToon, taking school groups and volunteers to clean-ups around the junction of the Ohio, Allegheny and Monongahela rivers. He and Aaron Lindberg will travel aboard a dory named Dora.

Also joining the flotilla were a dozen or more canoes; a few recycled powerboat hulls decorated with animal skulls and assorted knick-knacks; and two rafts kept afloat by plastic barrels.

First-time rafter Jake Telschow of south Minneapolis built his rig, the DD King, in his back yard and had it on the river in 12 days. After watching him and his crew — Alex and Kevin — shove off into the current, I was impressed with how river-worthy it looked.

Kevin Horn, from Nashville, was hitchhiking through Minneapolis, when he met Jake on the street and signed up on the spot. 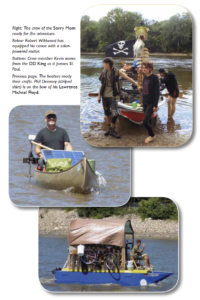 Phil Deveny of south Minneapolis is the owner and builder of one of the “barrel-toons.” His Lawrence Michelle Floyd has been down the river a time or two already. Not so his green hand, Carrie Feldman, also from south Minneapolis. She was nervous and excited to be plying the river for the first time.

I watched as everybody readied their gear, sorting, stashing and helping each other. From a distance the group looked rag-tag, but up close they were a cohesive, if abstract, team.

By about four in the afternoon the armada began to shove off in ones and twos to drift and spin lazily in the current, waving at those on shore, before getting paddles out and propellers spinning. It wasn’t long before they disappeared around the first bend.

A few years ago, when I would see those contraptions floating downstream from the pilot house of a harbor towboat, I would shake my head, roll my eyes and curse my luck for having to figure out a safe way around the gaggle of rafts. Now, after a day spent
watching them prepare and seeing the pride people like Rob, Evan, Aaron, Phil and Jake take in their vessels, I think of them as experimental boat builders. As I wished them luck, I was kinda wishing I could join them.