Piloting with a Paddle

Programs to share cars and bicycles have become pretty common in larger cities, but for the last two summers Twin Cities’ paddlers have been able to use a credit card to rent a kayak, paddles and personal floatation device (PDF) from a locker on the banks of the Mississippi River.

The first Mississippi River Paddle Share stations opened in Minneapolis on August 25, 2016. Last summer there were seven stations between Coon Rapids and downtown St. Paul for putting in and/or taking out paddle- share kayaks. The Coon Rapids to North Mississippi Regional Park stretch is mostly natural with islands and backwaters, as well as some parks and residential. Northeast Minneapolis provides the best of both natural and urban. St. Paul is more natural through the gorge and floodplain forests with sandy beaches.

I wanted to try the Hidden Falls to Harriet Island leg, because it’s close to my house and I expected to roll out of my kayak, so I wanted to be close to dry clothes. The program only rents kayaks Friday, Saturday and Sunday in September and October at some stations,and my weekends were busy piloting Padelford river tour boats. Susan Overson, planner for the Mississippi National River and Recreation Area, and Katie Nyberg, director of the Mississippi Park Connection, were nice enough to arrange an October outing on a Wednesday.

I started to get apprehensive about the weather a couple days before the paddle. On Monday and Tuesday, 30-mph winds made it hard to get a sternwheeler off of the dock at Harriet Island, but Wednesday morning looked to be a glorious day.

We met at Harriet Island early in the afternoon. National Park Service (NPS) rangers Dan Dressler and Randy Thoreson joined us and we headed for Hidden Falls Park.

At Hidden Falls, Susan walked me through the procedure at the kayak lockers. It’s pretty simple. You pick the stretch you want to paddle, make a reservation online, head for the embarkation point and punch a code into your assigned locker keypad.

All the stuff you need, — vessel, PDFs and paddle — are inside. Within minutes the five of us were on the water and just kind of chilling in the back eddy next to the boat landing. Dan and I removed our jackets because the sun was a blazing 55 degrees. Not long after we were underway Randy had done the same.

Susan reminded me to look at the map fixed between my legs in the bottom of the kayak. It showed the route to Harriet Island with the note reminding paddlers that they might encounter towboats and barges in this stretch.

I showed her and Dan an app on my phone that displayed commercial traffic on a map. It’s free at marinetraffic.com and can be upgraded for a few bucks. I use the free one to see if I will meet any barge traffic when piloting the Padelford boats

We made our way past Fort Snelling and Pike Island sometimes in a tight group and often just nosing around the backwaters or looking at eagles. I enjoyed seeing the surface of the river from up close, after 40-plus years of boating from a pilot house around here. A couple of times I just let a small eddy toy with the kayak and spin me around. I noticed, too, that reflections in the water have a different quality up close. If I had been on my own, I would have pulled ashore in a few places to take a peek beyond the shoreline I know so well.

Mostly it was just a nice, slow float without a passenger schedule or a dispatcher whining over the radio to hurry up. Gliding by Pike Island, Susan turned her bow into the sun and lifted her face to the warmth like a turtle. It only took a minute for the rest of us to join her.

We were truly blessed that day. At the lower end of the island, where the Minnesota River bangs into the Mississippi, I checked my iPhone app to see if any towboats were around the corner, but we were clear for the time being. Still I craned my neck to make sure the old JL Fleming wasn’t steaming down from Savage with six loaded barges ready to enter the channel.

I was almost disappointed not to encounter a barge. See, I am not above bragging a little and pointing to a tow and telling people “Oh yeah that’s a fun boat to steer. I drove that one for X seasons.”

I was rewarded several minutes later to see a couple of empty barges heading our way near the lower end of Crosby Park. 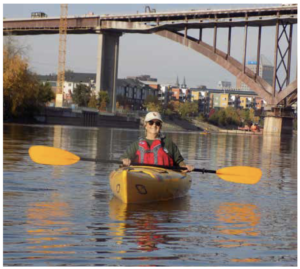 I spent years cursing little boats on the river. Speedboats, houseboats, rowing sculls, jet-skis, kayaks and canoes — you name it — are problematic for towboat operators pushing barges. If they are in front, you wonder if they’re gonna move in time. If they are off to one side, you wonder if the guy is going to try at the last minute to cross in front of your tow. That unpredictability would have me muttering under my breath until they were clear. Now here I am, sitting in a yellow plastic kayak watching one of my old crew mates heading my way on the Becky Sue with two empty barges northbound for Savage on the Minnesota River.

From my perspective, the paddle- share patrons have been no trouble at all. Every group I’ve encountered has been respectful and stayed clear.

The route for safely avoiding tows is well marked on the maps inside each kayak. We were underneath an eagle taking photos, so we were well out of Becky’s way. Our little flotilla was a mile above the sharp bend leading down towards the Omaha Railroad Bridge. This is a tricky spot for downbound tows, because the pilot needs to be on his marks before he can even see the bridge, to get through the bridge span as he rounds the bend.

This is the area where I am never quite sure what to tell small boaters. When Becky went up by us we were in the best possible spot over on the left descending shoreline. If I knew there was no northbound traffic below us, I would think nothing of crossing over to the right side. However, if a commercial boat were around the corner coming up through the bridge, I would say stay on the left.

Dan was floating nearby after we watched Becky disappear around the next bend. “The website has safety videos for folks to view before getting one of these kayaks,” he told me.

“It might be worthwhile to make some videos of tows coming through that bridge and around here, to cover some safe options for people who have never been out here,” I suggested.

I would advise folks to at least use the navigation app to check whether a tow is coming at them from around a bend.

Before long the Smith Avenue High Bridge and the St. Paul skyline were before us. Just below the bridge, over on the right bank, the haul-out sign was clearly visible upstream of the Padelford dock.

In short order we had the kayaks out and cabled to the lockers. I need to work on my paddling, as I had soaked my trousers (with river water) and got water spots on my darn camera lens.

By Thursday the wind whipped up again with rain and snow, which made the last two excrusions boat outings a miserable experience. Well, not really. The passengers never really seem to mind any time on the river, no matter what the weather.

Mississippi River Paddle Share is the first self-serve paddle/bike share program in a national park funded by the NPS but owned and operated by partners. The project received funds designated for alternative transportation systems. It won the 2017 American Recreation Coalition’s Legends Award for innovation in outdoor recreation. The program is gaining popularity and saw 1,817 rentals in 2017. 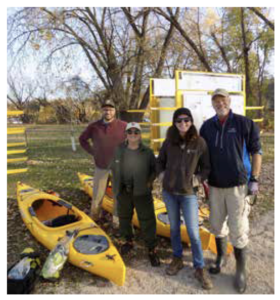 The program operates June through October. All equipment is in the locker and included with the rental. Single kayaks are $25 and tandems are $40 for a three-hour rental. You must be 18 or older and sign a waiver to rent a kayak. The program has the capacity to rent up to 64 boats. There are 14 tandems and 50 singles, which can accommodate up to 20 people at each station.

Prior to your scheduled time, keep a weather eye to the river (and the paddle-share website), because the program will shut down and refund reservations if unsafe conditions threaten.

I asked Susan to share her personal mission statement: “I have never enjoyed my job as much as I have these past few years. It has been so rewarding getting people to experience and enjoy paddling on the Mississippi River, and I get paid to do that! It also has been fun hearing from people all over the world who somehow heard about the program and want to know more.”